I haven’t been able to work on War Swarms recently. Another project has been demanding my time, and will continue to do so for the near future. I still have every intention of finishing War Swarms, but for now, things need to be put on pause. This is likely to be the last news post for a while, until I’m regularly putting time into War Swarms again.

Thanks for understanding. I know this is not the news you wanted to read. Not the one I wanted to have to write, either. Sorry.

This month, a lot of work went into making the game run faster. On the developer’s test machine, the game went from 50% idle CPU usage down to 10-15%. Lots of code improvements implemented here will also make it easier for the developer to add new content. This change is running now!

The next combat unit is the Overlord. It commands and coordinates your other troops during battle, improving their health and attack power. The Overlord, and the next few combat zones where you’ll both fight against Overlords and unlock them for your own use, are ready - but they’re not yet visible. Their first appearance will be in War Swarms’ first temporary league.

Action RPG fans might already be familiar with the idea of temporary leagues. Here’s how they’ll work:

“Why?” Temporary leagues allow the developer to experiment with new features and game balance changes, with far less danger of a bad idea impacting your permanent characters’ progress. Temporary leagues also give everyone a fair chance at the leaderboards - whether you’ve played the game for three minutes or three years, everyone in a temporary league starts from the same place.

Finally, the moment you’ve all been waiting for: at the time Overlord League starts, I’ll create a new post in /r/warswarms with some beta invites up for grabs. The game is still very incomplete, but temporary leagues are a big milestone, and I could use some more feedback. First come, first served; set your alarms now.

I usually aim to make at least one news post a month. It’s typically at the start of each month, but there won’t be one at the start of January. Expect the next major news post to be mid-January; a short mid-December update might (or might not) happen too. Happy holidays!

Slower progress than I’d hoped this month, unfortunately: no new features yet.

Since my last update a month ago, a known bug, which hadn’t caused much trouble before now, suddenly started to cause lots of trouble. It took a while to solve. Other behind-the-scenes stuff was happening too, and taken together, it delayed the plans I originally had for this month.

So, October’s plans are bumped to November:

I’ll be adding more types of soldiers beyond just swarmlings, the first temporary league, and several performance improvements, among other things.

Many of you have been waiting for beta invitations. We’re getting closer - thanks for being so patient! There will be more news posts about beta invites this month.

Thanks for your patience!

October 1st’s launch went very well. Expect to see new features launched this way in the future. That is, changelogs and version-number timing will not match new-feature-is-visible timing, since code will be written and deployed well before it’s actually visible.

September’s been a productive month for War Swarms. As promised in my last update, we now have a combat system:

Your swarmling-queens, hatched outside of combat, produce swarmlings during combat. Every few seconds, your swarmlings attack the enemy. Destroy the enemy Lair to win!

I’ve also worked on adding the infrastructure behind leagues. Leagues are periodic “seasons” that will have slightly different rules or new experimental features. Choose a league when starting a new character. 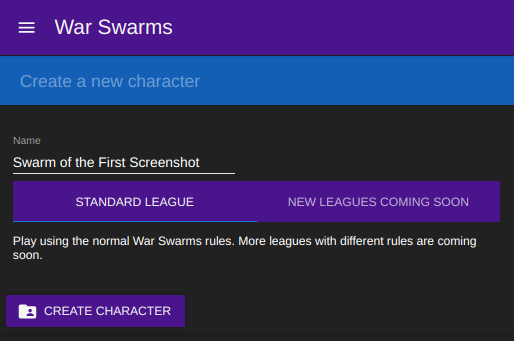 These changes, along with a few smaller features, will appear in the beta on October 1, when the new in-game countdown timer reaches zero.

In October, I’ll be adding more types of soldiers beyond just swarmlings, the first temporary league, and several performance improvements, among other things.

Many of you have been waiting for beta invitations. We’re getting closer - thanks for being so patient! There will be more news posts about beta invites this month.